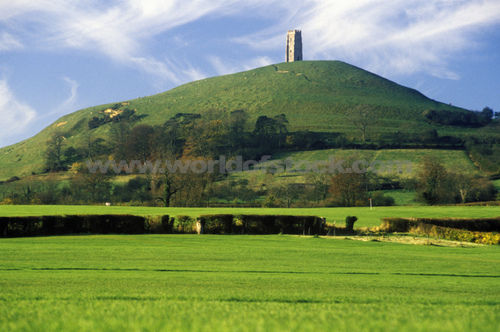 Glastonbury Tor is a hill at Glastonbury, Somerset, England, which features the roofless St. Michael's Tower. The site is managed by the National Trust. 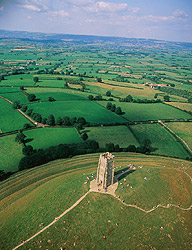 Tor is a local word of Celtic origin meaning 'conical hill'. The Tor has a striking location in the middle of a plain called the Summerland Meadows, part of the Levels. The plain is actually reclaimed fenland out of which the Tor rose like an island, but now, with the surrounding flats, is a peninsula washed on three sides by the River Brue. The remains of were identified in 1892, showing that there was an Iron Age settlement about 300–200 BC on what was an easily defended island in the fens. Earthworks and Roman remains prove later occupation. The spot seems to have been called Ynys yr Afalon (meaning "The Isle of Avalon") by the Britons, and it is believed to be the Avalon of Arthurian legend. 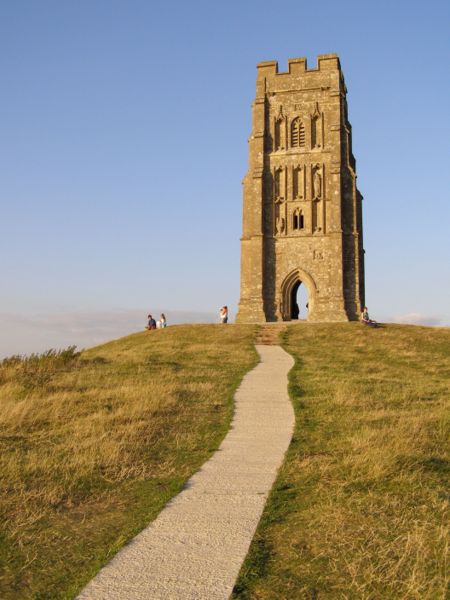 Interior of St Michael's ChurchSome Neolithic flint tools recovered from the top of the Tor show that the site has been visited and perhaps occupied throughout human prehistory. Excavations on Glastonbury Tor, undertaken by a team led by Philip Rahtz between 1964 and 1966, revealed evidence of Dark Age occupation around the later medieval church of St. Michael: postholes, two hearths including a metalworker's forge, two burials oriented north-south (thus unlikely to be Christian), fragments of 6th century Mediterranean amphorae (vases for wine or cooking oil), and a worn hollow bronze head which may have topped a Saxon staff. The Celtic name of the Tor was "Ynys Wydryn", or sometimes "Ynys Gutrin", meaning "Isle of Glass". At this time the plain was flooded, the isle becoming a peninsula at low tide. 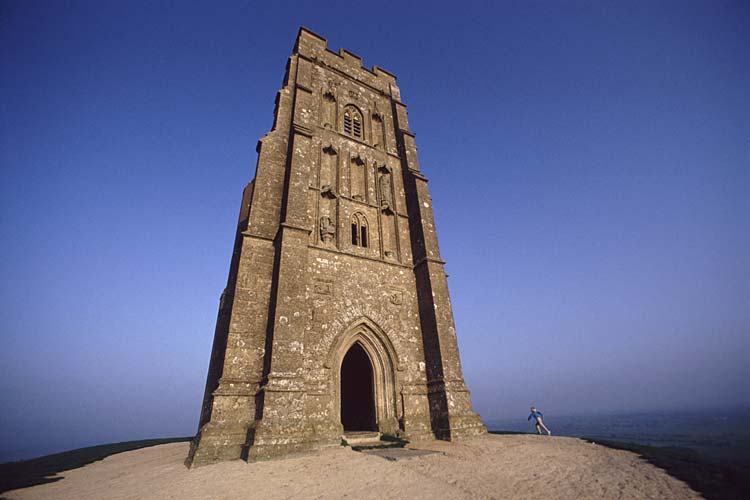 Remains of a 5th century fort have been found on the Tor. This was replaced by the medieval St. Michael's church that remained until 1275. According to the British Geological Survey, an earthquake was recorded on , which was felt in , and and this quake destroyed the church. The quake was also reported to have destroyed many houses and churches in England. It is suggested that the quake had a magnitude of well over 7 MSK and it is possible that the epicentre of the quake was in the area around or , .

A second church, built in the 1360s, survived until the Dissolution of the Monasteries in 1539 when the Tor was the place of execution where Richard Whiting the last Abbot of Glastonbury Abbey was hanged, drawn and quartered along with two of his monks. The remains of St. Michael's Tower were restored in modern times. It is a grade I listed building and is managed by the National Trust. 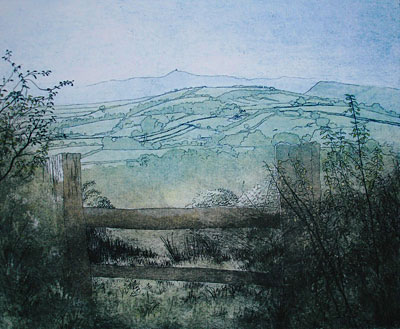 The Tor has been associated with the name Avalon, and identified, since the alleged discovery of King Arthur and Queen Guinevere's neatly labelled coffins in 1191, with the legendary hero King Arthur. Modern archaeology has revealed a fort, dated to the 5th century.

With the 19th-century resurgence of interest in Celtic mythology, the Tor became associated with Gwyn ap Nudd, who was first Lord of the Underworld, and later King of the Fairies. The Tor came to be represented as an entrance to Annwn or Avalon, the land of the fairies. 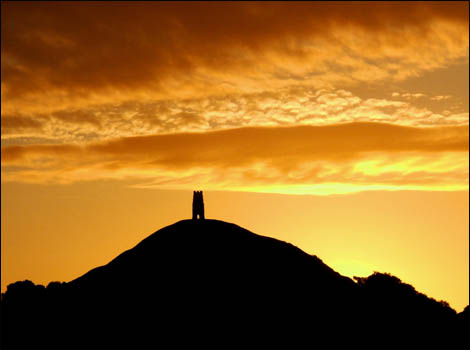 A persistent myth of more modern origin is that of the Zodiac, an astrological zodiac of gargantuan proportions said to have been carved into the land along ancient hedgerows and trackways. The theory was first put forward in 1927 by Katherine Maltwood, an artist with an interest in the occult, who thought the zodiac was constructed approximately 5,000 years ago. The vast majority of the land said to be covered by the zodiac was, at the proposed time of its construction, under several feet of water.

Christopher Hodapp asserts in his book The Templar Code For Dummies that Tor is one of the possible locations of the Holy Grail. This is because it is close to the location of the monastery that housed the Nanteos Cup.

Another speculation is that the Tor was reshaped into a spiral maze for use in religious ritual, incorporating the myth that the Tor was the location of the underworld king's spiral castle. 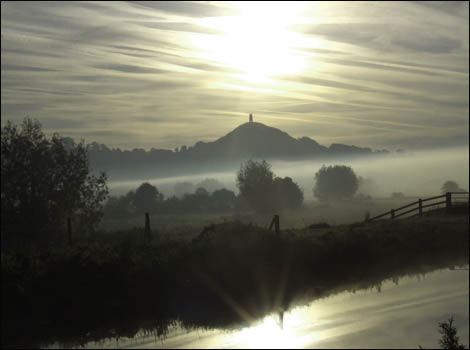 Terraces on the Tor The seven deep, roughly symmetrical terraces are one of the Tor's enduring mysteries. A number of possible explanations for them have been put forward:

Agriculture — many cultures, not least the British farmers of the Middle Ages have terraced hills to make ploughing for crops easier. Mann, however, observes that if agriculture had been the reason for the creation of the terraces, it would be expected that the effort would be concentrated on the south side, where the sunny conditions would provide a good yield, however it may be seen that the terraces are equally deep on the north, where there would be little benefit. Additionally, none of the other slopes of the island have been terraced, even though the more sheltered locations would provide a greater return on the labour involved.

Cattle grazing — over long periods of time, cattle grazing can cause terraces to develop, but these are usually of a much smaller size than those observed at and also tend to run parallel to the contours of the hill. In some places, the terraces of are quite steep and it is difficult to point to other hills with comparable patterns of livestock-induced erosion. 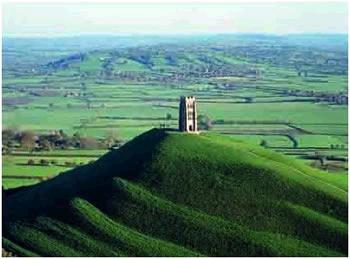 Defensive ramparts — Other Iron Age hill forts in the area show evidence of extensive fortification of the slopes of hills, (for example, South Cadbury Castle). However, the normal form of these ramparts is that of a bank and ditch and on the Tor, there is no evidence of this arrangement. Additionally, , as one of the most extensively fortified places in early had three concentric rings of banks and ditches supporting an 18 hectare enclosure. By contrast, the Tor has seven rings and very little space on top for the safekeeping of a community, making it a strange thing indeed to have spent so much effort to have gained so little.

Labyrinth — Professor Rahtz felt that the theory that the Tor terraces formed the remains of a three dimensional labyrinth was "well worth consideration" (in Mann, 1993). The theory, first put forward by Geoffrey Russell in 1968, states that the 'classical labyrinth' (Caerdroia), a design found all over the Neolithic world, can be easily transposed onto the Tor so that by walking around the terraces one eventually reaches the top in the same pattern. Evaluating this hypothesis is not easy. A Labyrinth would very likely place the terraces in the Neolithic era (Rahtz, in Mann, 1993), but given the amount of occupation since then, there may have been substantial modifications by farmers and/or monks and conclusive excavations have not been carried out.

A concrete path to the summit aims to reduce the effects of soil erosionThe Tor consists of layers of clay and blue lias strata (Jurassic sandstone) with a cap of hard midford sandstone, whose resistance to erosion compared to the lower layers is responsible for its height. The iron-rich waters of Chalice Well, a spring, have been flowing out as an artesian well for millions of years, impregnating the sandstone round it with iron oxides that have reinforced it. Iron-rich but oxygen-poor water in the aquifer carries dissolved Iron (II) "ferrous" iron, but as the water surfaces and its oxygen content rises, the oxidized Iron (III) "ferric" iron drops out as insoluble "rusty" oxides that bind to the surrounding stone, hardening it. As the surrounding soft sandstone has eroded away, Tor has slowly been revealed. 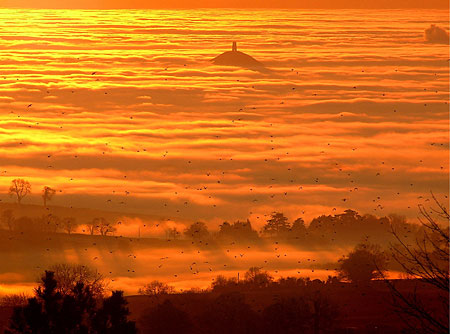 The Theosophy Wales Guide to

& of course you don’t need to live in Wales

to take advantage of this guide

Surrey, England is to be sold to a developer.

for the Adyar Theosophical Society in England in 1929.

In addition to concern about the park, many are

worried about the future of the Tekels Park Deer

as they are not a protected species.

Theosophy talks of a compassionate attitude

to animals and the sale of the Tekels Park

sanctuary for wildlife to a developer has

What the men in top hats have to

say about the sale of Tekels Park

Within the British Isles, The Adyar Theosophical Society is the

largest Theosophical Body and has Groups in;

Association in March 2008 and became an independent

body within the Theosophical Movement in March 2010

to the Adyar Based Theosophical Society