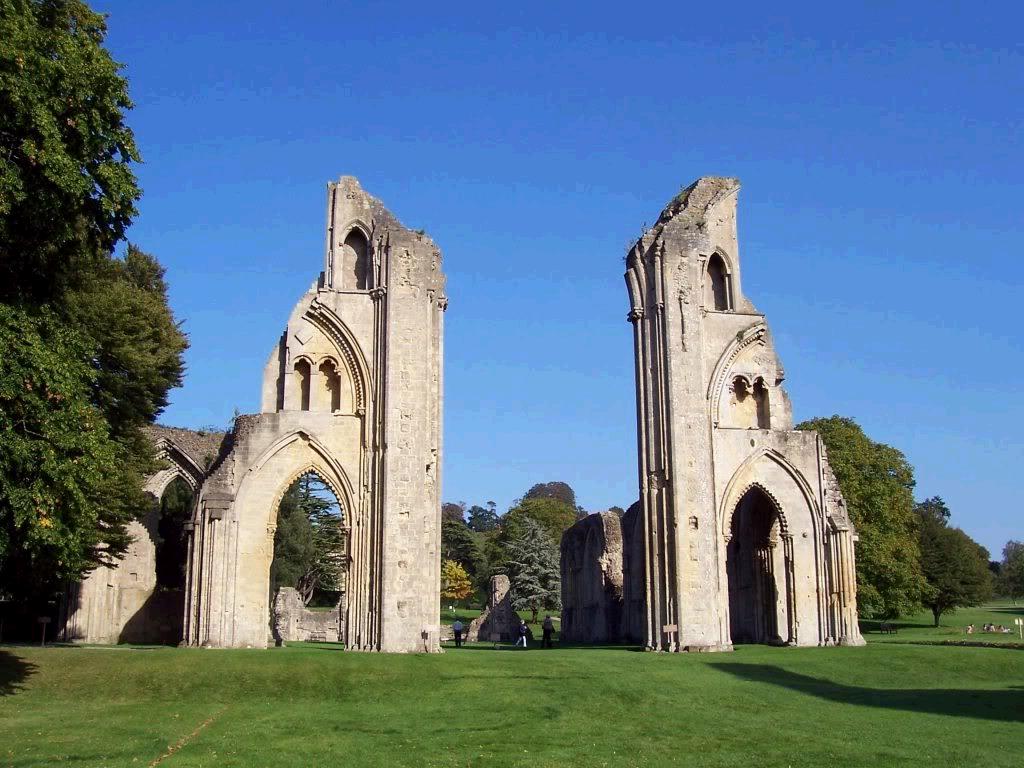 Glastonbury Abbey was a rich and powerful monastery in Glastonbury, Somerset, . Since at least the 12th century the area was frequently associated with the legend of King Arthur, a connection promoted by medieval monks who asserted that was Avalon. The abbey was suppressed during the Dissolution of the Monasteries under King Henry VIII of . The ruins and associated buildings are open today as a visitor attraction. 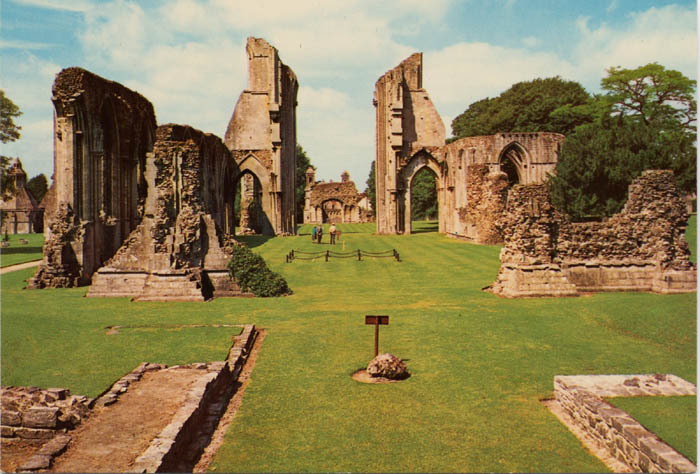 fell into Saxon hands after the of Peonnum in 658. The Saxons under Cenwalh of conquered as far west as the River Parrett, perhaps with the intention of gaining control of the valuable abbey. However, Cenwalh allowed the British abbot, Bregored, to stay in power, a move perhaps intended as a show of good faith to the defeated Britons. After Bregored's death in 669, he was replaced by the Anglo-Saxon Berhtwald, but British monks remained for many years after.

King Ine of enriched the endowment of the community of monks already established at . He is said to have directed that a stone church be built in 712, the foundations of which now form the west end of the nave. was ravaged by the Danes in the ninth century. The contemporary reformed soldier Saint Neot was sacristan at before he went to found his own establishment in . The abbey church was enlarged in the tenth century by the Abbot of , Saint Dunstan, the central figure in the tenth-century revival of English monastic life, who instituted the Benedictine Rule at . Dunstan became Archbishop of in 960. Dunstan built new cloisters as well. In 967, King Edmund was laid to rest at . In 1016 Edmund Ironside, who had lost to Canute but held onto the title of King of , was buried there too. King Cnut's charter of 1032 was "written and promulgated in the wooden church at , in the kings presence". 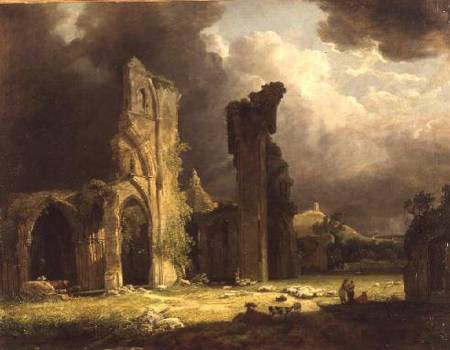 At the Norman Conquest in 1066, the wealth of made it a prime prize. The new Norman abbot, Turstin, added to the church, unusually building to the east of the older Saxon church and away from the ancient cemetery, thus shifting the sanctified site. Not all the new were suitable heads of religious communities. In 1077, Thurstin was dismissed after his armed retainers killed monks right by the High Altar. In 1086, when Domesday Book was commissioned, Abbey was the richest monastery in the country. Abbot Henry of Blois commissioned a history of Glastonbury, about 1125, from the chronicler William of Malmesbury, whose De Antiquitate Glastoniensis Ecclesiae is our source for the early recorded history, and much awe-inspiring legend as well. Then as now, legend worked more strongly than raw history to bring the pilgrims who sustained the Abbey's reputation and contributed to its upkeep. 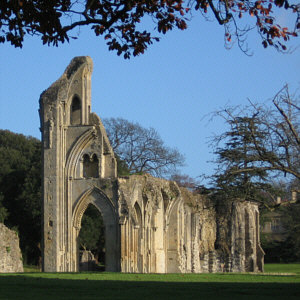 Purported site of King Arthur and Queen Guinevere's tomb beneath the high altar In 1184, a great fire at destroyed the monastic buildings. Reconstruction began almost immediately and the Lady Chapel, which includes the well, was consecrated in 1186. There is evidence that, in the twelfth century, the ruined nave was renovated enough for services while the great new church was being constructed. If pilgrim visits had fallen, the discovery of King Arthur and Queen Guinevere's grave in the cemetery in 1191 provided fresh impetus for visiting . According to two accounts by the chronicler, Giraldus Cambrensis,[9] the abbot, Henry de Sully, commissioned a search, discovering at the depth of 16 feet (5 m) a massive hollowed oak trunk containing two skeletons. Above it, under the covering stone, according to Giraldus, was a leaden cross with the unmistakably specific inscription Hic jacet sepultus inclitus rex Arthurus in insula Avalonia ("Here lies interred the famous King Arthur on the Isle of Avalon").

Annexation to and Wells

Five years later, in 1197, Savaric FitzGeldewin, bishop of and Wells, persuaded Pope Celestine III to allow the annexation of Abbey to his diocese. He officially moved his Episcopal seat there, but the monks would not accept their new Bishop of and he was kept away from the abbey.[11] The bishops continued to use the title Bishop of and until finally renouncing their claim to in 1219. Services in the reconsecrated had begun on Christmas Day, 1213, most likely before it was entirely completed. King Edward I and Queen Eleanor attended the magnificent service at the reburial of King Arthur's remains to the foot of the High Altar in 1278.

In the 14th century, only Abbey was more richly endowed and appointed than . The abbot of kept great state, now attested to simply by the ruins of the abbot's kitchen, with four huge fireplaces at its corners. The kitchen was part of the magnificent Abbot's house begun under Abbot John de Breynton (1334–42). It is one of the best preserved medieval kitchens in , and the only substantial monastic building at surviving at . Archaeological excavations have revealed a special apartment erected at the south end of the Abbot's house for a visit from Henry VII, who visited the Abbot in a royal progress, as he visited any other great territorial magnate. The conditions of life in during the Wars of the Roses became so unsettled that a wall was built around the Abbey's precincts.

Dissolution of the Monasteries

At the start of the Dissolution of the Monasteries in 1536, there were over 800 monasteries, nunneries and friaries in . By 1541, there were none. More than 15,000 monks and nuns had been dispersed and the buildings had been seized by the Crown to be sold off or leased to new lay occupiers. Abbey was once more a rich plum. In September 1539, the Abbey was stripped of its valuables and Abbot Richard Whiting (Whyting), who had been a signatory to the Act of Supremacy that made Henry VIII the head of the church, resisted and was hanged, drawn and quartered as a traitor on Tor on .

After the Dissolution, two of the Abbey's manors in Wiltshire were sold by the Crown to John Thynne and thereafter descended in his family, who much later became Marquesses of . The Thynnes have preserved many of the Abbey's Wiltshire records at Longleat up to the present day.

By Shakespeare's time, two generations later, was one of the "bare ruin'd choirs Where late the sweet birds sang." 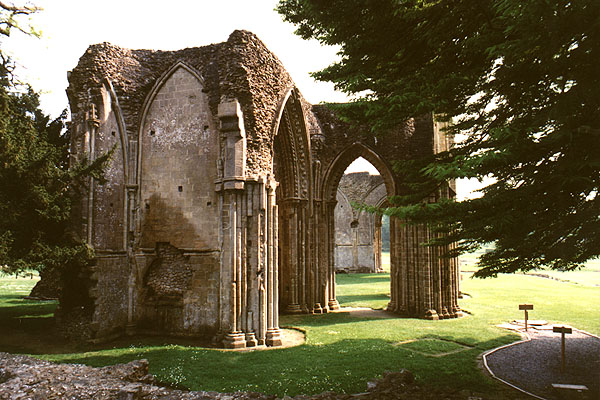 One of the earliest surviving manuscripts, now at the Bodleian Library, telling that Dunstan the abbot gave orders for the writing of this book.The Abbey library was described by John Leland, King Henry VIII's antiquary who visited it, as containing unique copies of ancient histories of England and unique early Christian documents. It seems to have been affected by the fire of 1184, but still housed a remarkable collection until 1539 when it was dispersed at the Dissolution of the Monasteries. Some of the manuscripts from have been traced. 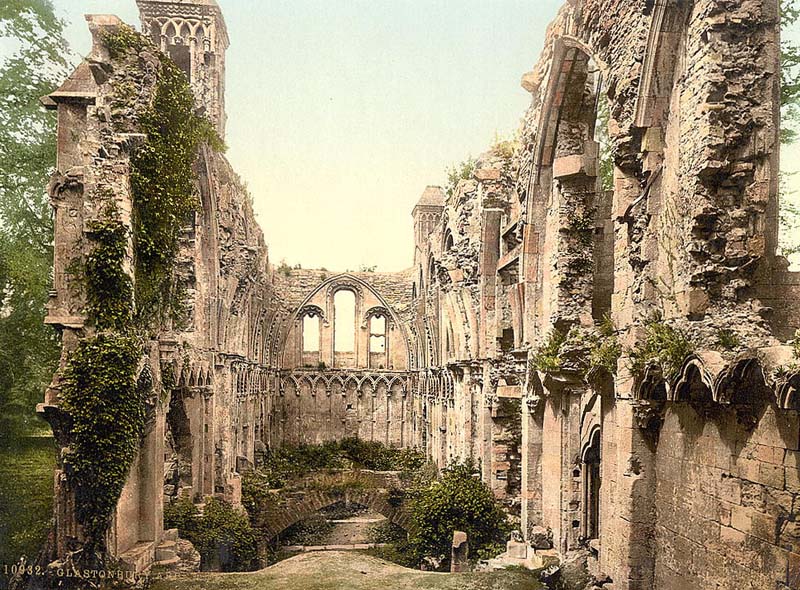 The ruins of Abbey were purchased by the and Wells Diocesan Trust in 1908. The ruins are therefore now the property of the Church of England. On acquiring the site the Church appointed Frederick Bligh Bond to direct an archaeological investigation.

A pilgrimage to the ruins of Abbey was held by a few local churches in 1924. Pilgrimages continue today to be held; in the second half of June for the Anglicans and early in July for the Catholics and they attract visitors from all over Western Europe. Services are celebrated in the Anglican, Roman Catholic and Eastern Orthodox traditions.

The ruins of the great church, along with the Lady Chapel is a grade I listed building, set in 36 acres (150,000 m2) of parkland and open to the public. It is approached by the Abbey Gatehouse which was built in the mid 14th century and completely restored in 1810. The 14th century Abbey Barn is also open to the public, outside the walls, as part of the Somerset Rural Life Museum. 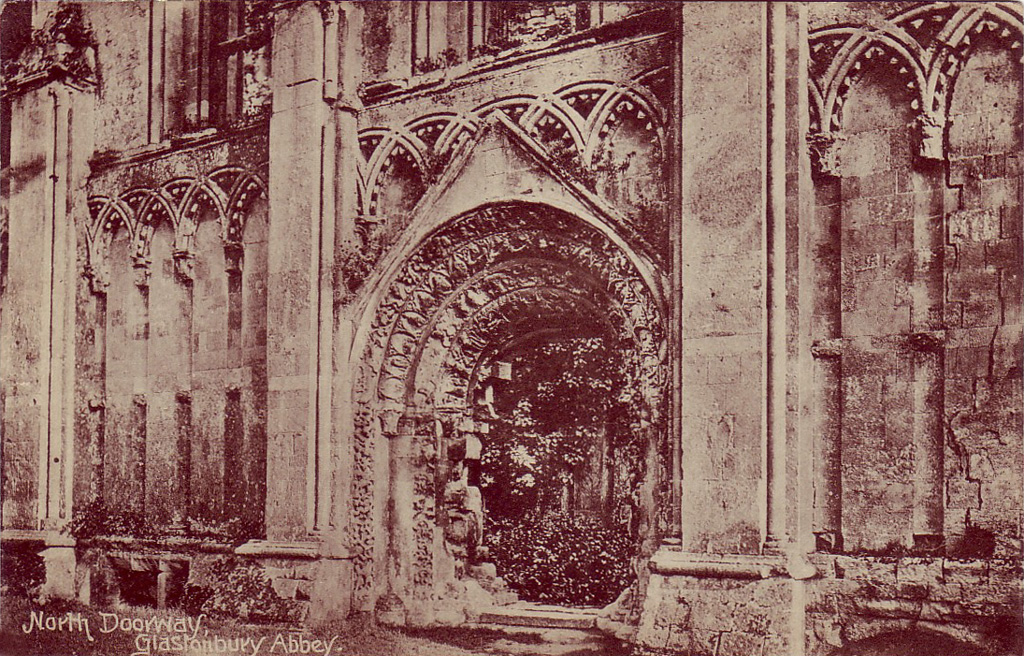 Within the British Isles, The Adyar Based Theosophical Society is the largest

Single Theosophical body and has Groups in;

Surrey, England is to be sold to a developer.

for the Adyar Theosophical Society in England in 1929.

In addition to concern about the park, many are

worried about the future of the Tekels Park Deer

as they are not a protected species.

It doesn’t require a Diploma in Finance

and even someone with a Diploma in

Astral Travel will know that this is a

Association in March 2008 and became an independent

body within the Theosophical Movement in March 2010

to the Adyar Based Theosophical Society